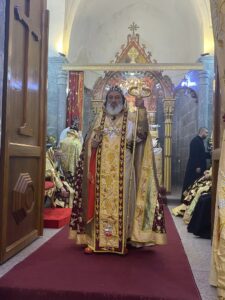 On September 18, 2022, on the occasion of the Feast of Mor Matta the Hermit, His Holiness Patriarch Mor Ignatius Aphrem II celebrated the Holy Qurobo at Mor Matta Monastery.

In his sermon, His Holiness spoke about the great saints of our church, who were firmly attached to their faith and fought all heresies and strange teachings. His Holiness then gave an overview of the life of Mor Matta the Hermit whose feast is celebrated today. He pointed out to the most important miracles he performed. He also spoke about how Mor Matta baptized the pagan King Sanharib after healing him from his sickness. His Holiness encouraged the faithful to hold firmly to their faith despite the difficulties and to remain loyal to the church and homeland.

During the Holy Qurobo, His Holiness bestowed the Holy Cross to Very Rev. Boulos Abdelkarim, Priest of Morth Shmouni Church in Bashiqa, for his service to the Holy Church.